Ginger and Its Uses in TCM 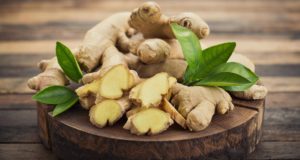 Ginger is a common spice once considered a luxury. Ancient Chinese and Indians used the root of the ginger plant as a tonic to treat various common ailments. Ginger originated in Southeast Asia, but since then it has been widely cultivated all around the world. At its height in popularity during the 14th century, ginger cost about the same as a piece of livestock. Today, ginger can be found in almost every local grocery store and is used worldwide.

So what makes ginger such a special herb? Its versatility. Ginger can be used for many different issues. The dominant property of ginger is that it is warming. Some people associate this with being spicy. The truth is, after a person eats ginger, the body will feel a little warmer. Over time, eating ginger daily can actually increase the body temperature. This is great for those who suffer from blood deficiency and a feeling of constant cold. This also helps people who suffer from aches and pains that flare up during the cold weather.

Ginger is frequently used to help treat digestive problems. It can effectively reduce nausea, whether it’s from morning sickness or chemotherapy. Because of its warming properties, it also aids in stimulating digestion. Grating ginger and adding it to water daily can be very beneficial for the digestive tract.

Another way ginger is used is to help treat colds or the flu. Combining ginger with scallions and making a hot water broth can help kick out a cold quickly. The combination of scallions and ginger will heat the body up, making you sweat a little. This may be just what is needed for sweating out the infection.

Ginger can also be used to treat food poisoning or dysentery. Ingesting ginger increases the secretion of gastric juices. This helps the body digest food more quickly. Ginger also creates an inhospitable environment for toxic bacteria in the gut. By increasing digestion, the toxins can be excreted quickly.

Pain and inflammation are rampant in the world today, but ginger can provide some relief. Studies show ginger consumption can reduce muscle aches and pains. Ginger has also been used in studies on cancer, showing decreased inflammation in the body.

One last way ginger consumption can benefit the body has to do with the cardiovascular system. Ginger has been shown to reduce cholesterol, which can lower the incident of heart attacks.

Ginger is used frequently in many of the herbal formulas Chinese medicinal practitioners prescribe. If you or somebody you know suffers from any of the aforementioned conditions, it might be a good idea to consider using ginger.

Whether you’re in the middle of a total diet overhaul or just looking to bring more balance and resilience into your body, this morning cleanser is one of the simplest dietary habits you can introduce, while also having a huge positive impact on your health.

This lemon and ginger cleanser is full of nutritional benefits. Lemon is an alkalizing food, meaning when the body metabolizes lemon juice (as well as other citrus fruits), it breaks it down into alkaline elements. All food, when it is metabolized in the body, it either breaks it down into acid or alkaline elements. Our bodies are normally slightly alkaline, so a diet that is too high in acid-forming foods, causing the body to become too acidic, can contribute to mucus buildup in the body. We need some mucus, but excess mucus in the body can be conducive to the growth of bacteria and viruses. Mucus buildup also contributes to congestion, which leads to many illnesses. According to traditional Chinese medicine, a diet consisting of 70 to 80 percent alkaline-forming foods will support harmony in the body, keeping the digestive and nervous systems strong.

Especially first thing in the morning, when our stomachs are basically empty, it can be very beneficial to start the day with an alkaline-forming drink. Lemon also boosts immunity with vitamin C and potassium, helps keep your skin clear and aids in digestion. Adding ginger to the alkaline-forming lemon juice packs an additional punch to the drink. Ginger stimulates digestion and can help reduce nausea. It also improves circulation in the body and has been shown to reduce inflammation.

One of the great things about introducing this cleanser into your daily routine is that it can be modified or tweaked to support your personal health needs. Adding cayenne to the mix will help boost your metabolism, and it works as a decongestant and a pain reliever. Turmeric can be added for powerful anti-inflammatory effects. Honey is also a great addition, simultaneously balancing out the sour taste of the lemon while adding antimicrobial, antiviral and antifungal properties to the drink.

Ginger and Its Uses in TCM was last modified: February 20th, 2019 by Carlos Carpintero